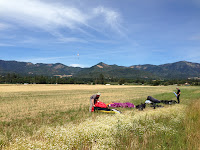 We had super clear skies and strong conditions for the practice day, with lift to 8 grand for most folks, and some getting close to 10. Many found it quite spicy, and it definitely required some active flying. A lot more than we're used to on Oahu! But overall I thought it was one of the nicest thermal days I've flown here. Many first time Hawaii pilots got a great introduction to the site and acquitted themselves well in the thermals. And it was a great confidence boost for me, flying in the harder event for the first time, on a high performance wing. Thanks again to Duck and Woody for helping me reline my glider before this trip! It feels like a brand new rocket ship again.
Thom, Joey, Steve and Frosty thermaled the Sprint course and made goal at Longsword Vineyard. Flystrong skipped a few waypoints but made goal as well. I think most of the Maui pilots in the Sprint made goal as well. Scrappy, Rayna, Igor and I started along the very difficult 73 km Race task and made a few hard won turn points. It was sweet to start many transitions from 8 grand - we don't get consistent heights like that very often. Fireman Dave showed up late from the airport and flew the Sprint task. Frank showed up to surprise us all and had a fun flight too. That brings us to 26 Hawaii monkeys!

I received many lessons on this practice day. I forgot sunscreen, tape, and my pen. Thanks to Thom for sharing his. The Flymaster vario Duck loaned me was still set for the Hawaii time zone - I didn't know I would have to tell a GPS device where I am! So the device never started to navigate the task. It was waiting three hours! Also the units were set for miles, so trying to manually tag the kilometer cylinders was crazy.

I also learned a lot from all the really great pilots in my group. The lead gaggle flew outside the box in many ways. For one thing, they didn't wait for the start time - they figured it was just a practice day, so they just zoomed away to get the best part of the day. Then halfway through the course, they flew way past the furthest turn point in order to get high and blast back downwind to tag the remaining points. I tried a crosswind approach over a huge windy valley and found no food lift on my way across. One pilot threw her reserve just moments before I approached the other side - she landed fine but it made me wonder if the air was gonna be ugly over there. I came in low over a heavily forested ridge, in strong valley flow, slightly in the lee of an upwind spur. I fought it out briefly, but finally opted to play it safe and land in a freshly mown hay field next to Tom Martinson. We were joined soon after by Debbie, Virgil, and Greg.

Retrieve was a bit disorganized on this first day but we finally got a ride back on the short bus from Sarge, and when Reaper crossed paths with him he shared some very refreshing cold beverages with us. Thanks Pete! Today is a rain day, and we might have a couple more. But we're hoping the last four days deliver conditions as great as yesterday's. In the meantime we have time for lots of seminars and discussions, and catching up with old friends.

I took some video from this practice day and hopefully I'll get a chance to upload a short clip here to share the view from 8500 feet!
Posted by Alex at 5:21 PM 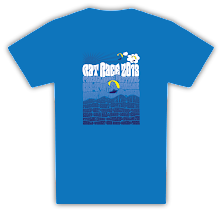 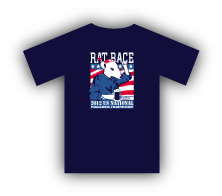 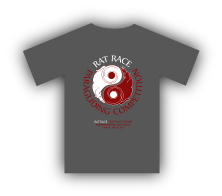